In the Northeastern US region, an operator teams with Ulterra to drill a record build and curve, demonstrating the potential and flexibility of PDC drilling on Air. 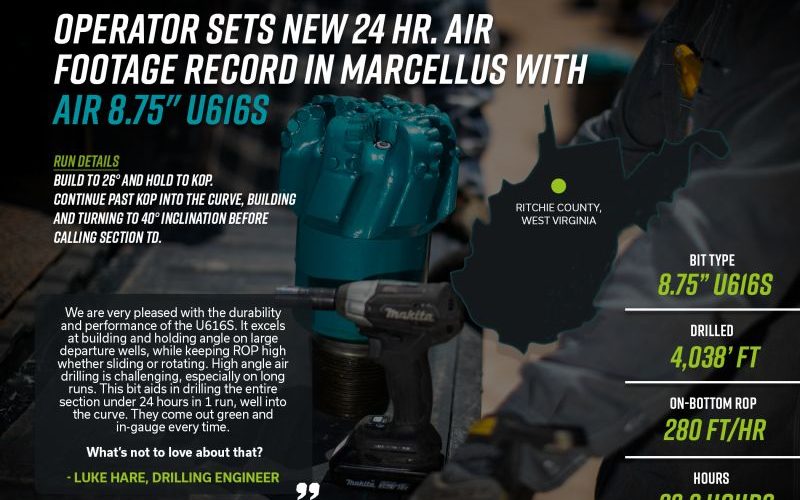 Leading to Kick Off Point

On a recent run in Ritchie County, WV, an operator utilized Ulterra’s air 8.75″ U616S to drill their new 24-hour air footage record. During the run, the operator built to 26 degrees and held to kick off point (KOP). Continuing past KOP into the curve, operations built and turned to 40 degrees inclination before reaching total depth.

Luke Hare, a Drilling Engineer for the operator, remarked, “We are very pleased with the durability and performance of the U616S. It excels at building and holding angle on larger departure wells, while keeping ROP high whether sliding or rotating. High angle air drilling is challenging, especially on long runs. This bit aids in drilling the entire section under 24 hours in 1 run, well into the curve. The bit comes out green and in-gauge every time.”

The first AirPDC™ bit designs from the ground up, Ulterra’s AirRaid technology brings the performance of PDC drilling to air drilling applications. With an elevated focus on gas-chamber uniformity thru the drill bit, AirRaid can deliver high performance while air drilling and then ‘mudding up’ to seamlessly drill the following interval on drilling fluid.

Operator Beats Roller Cone ROP in Air Drilling Application with PDC Bit
Operator Drills Their Fastest Curve to Date
We use necessary cookies to remember your selected preferences. To help us continue to improve, we’d like to set other cookies. These will only be set if you accept. By clicking “Accept All”, you consent to the use of ALL cookies. Visit “Manage Cookie Preferences” to update your preferences at any time.