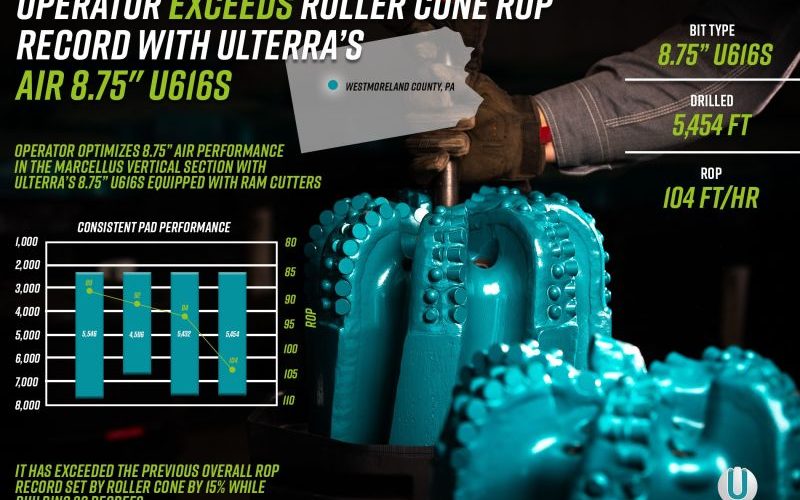 Greater ROP Versus the Previous Record

Feet Drilled in this Vertical Section

In the Marcellus, operators drilling on air still routinely run roller cone bits to achieve desired speed in their drilling programs. Recently, an operator partnered with our team to drill four consistent 8.75″ air tangent runs – building the confidence for an Ulterra PDC.

On the most recent run, this operator utilized Ulterra’s AIR 8.75″ U616S with RAM cutters to drill 5,454 ft. at an unparalleled ROP of 104 ft/hr. This run exceeded the previous overall ROP record set by the roller cone by 15% while building 30°. Across the pad, this design has demonstrated its ability to not only keep up with the standard performance of a roller cone but outpace its best performance.

The first AirPDC™ bit designs from the ground up, Ulterra’s AirRaid technology brings the performance of PDC drilling to air drilling applications. With an elevated focus on gas-chamber uniformity thru the drill bit, AirRaid can deliver high performance while air drilling and then ‘mudding up’ to seamlessly drill the following interval on drilling fluid.

Colombian Operator Increases Field ROP by 50% in Llanos Basin
Operator Sets a 24-Hour Air Drilling Footage Record in the Marcellus
We use necessary cookies to remember your selected preferences. To help us continue to improve, we’d like to set other cookies. These will only be set if you accept. By clicking “Accept All”, you consent to the use of ALL cookies. Visit “Manage Cookie Preferences” to update your preferences at any time.