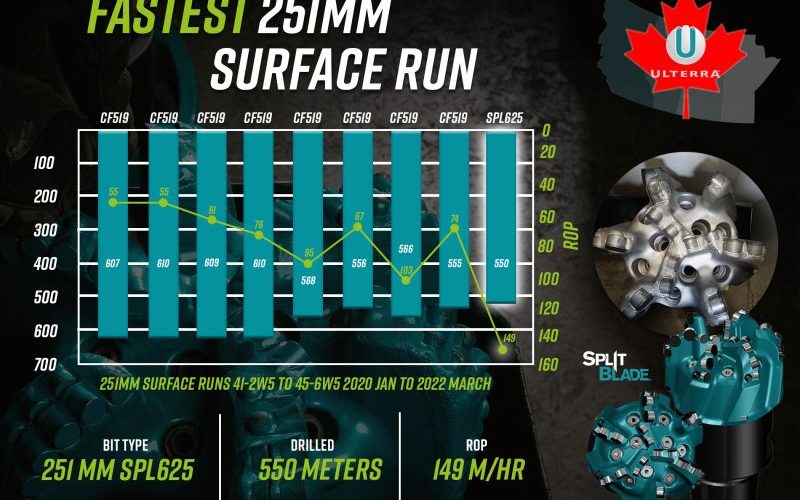 An operator in Canada recently partnered with our team to drill their 251 mm surface hole in the Pembina field. Utilizing Ulterra’s 251 mm SPL625, the operator achieved the fastest comparable surface run in the area. The 550 m drilling operation was completed in just 3.7 hours – achieving a top ROP of 149 m/hr.

This particular 251mm SPL625 is equipped with Split Blade®, CounterForce®, and FastBack™ technologies – known as the Ulterra ‘trifecta’ – which creates a powerful combination of vibration reduction, cuttings evacuation improvement, and maximum ROP potential to help operators push the limit on their performance.

Named after the Pembina river, the Pembina oilfield is one of the largest conventional plays in the province of Alberta, Canada. Second only to the oil sands found in the McMurray formation, the formation is estimated to have 1.81 billion barrels of recoverable reserves and was discovered in 1953 by Mobil Oil. The three main plays in the field are the Cardium Formation, Viking Formation, and Fernie Formation.  References: A.R. Nielsen, F.R. Michaelis, H.K. Roessingh and W.D. MacDonald. Cardium Symposium. Journal of the Alberta Society of Petroleum Geologists, Vol. 5 (1957), No. 4.

The Original UTechnology, Counterforce technology from Ulterra is focused on improving drilling dynamics by reducing and harnessing vibrational energy. Counterforce is the first line of defense to get the most from your BHA.

Ulterra’s FastBack technology gets the blade out of the way to increase maximum ROP potential. By using superior materials and engineering principles, we can design the bit in a way that focuses more of the drilling energy on the PDC cutters themselves.

Ulterra’s Patriot Bit Performs Double-Duty for Blue Dome Operating
Pembina Field Vertical ROP Record
XWe use cookies on our website to give you the most relevant experience by remembering your preferences and repeat visits. By clicking “Accept All”, you consent to the use of ALL the cookies. However, you may visit "Cookie Settings" to provide a controlled consent. Read MoreReject AllAcceptCookie Settings
Manage consent

This website uses cookies to improve your experience while you navigate through the website. Out of these, the cookies that are categorized as necessary are stored on your browser as they are essential for the working of basic functionalities of the website. We also use third-party cookies that help us analyze and understand how you use this website. These cookies will be stored in your browser only with your consent. You also have the option to opt-out of these cookies. But opting out of some of these cookies may affect your browsing experience.
Necessary Always Enabled
Necessary cookies are absolutely essential for the website to function properly. These cookies ensure basic functionalities and security features of the website, anonymously.
Functional
Functional cookies help to perform certain functionalities like sharing the content of the website on social media platforms, collect feedbacks, and other third-party features.
Performance
Performance cookies are used to understand and analyze the key performance indexes of the website which helps in delivering a better user experience for the visitors.
Analytics
Analytical cookies are used to understand how visitors interact with the website. These cookies help provide information on metrics the number of visitors, bounce rate, traffic source, etc.
Advertisement
Advertisement cookies are used to provide visitors with relevant ads and marketing campaigns. These cookies track visitors across websites and collect information to provide customized ads.
Others
Other uncategorized cookies are those that are being analyzed and have not been classified into a category as yet.
Save & Accept